Connecting the Dots: A Landscape Approach for Michigan CWD 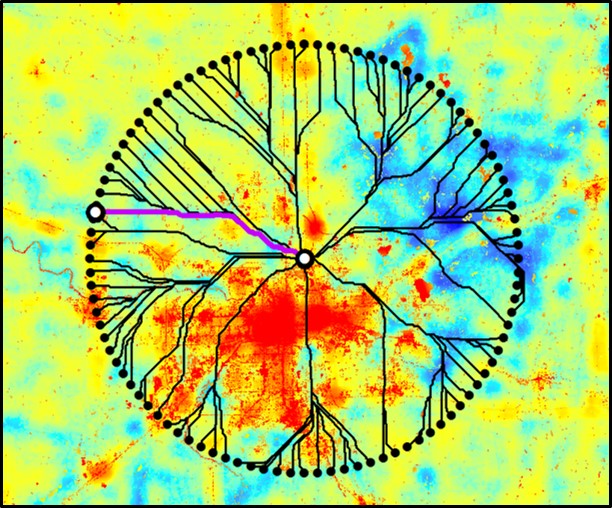 Chronic wasting disease (CWD) is a transmissible spongiform encephalopathy affecting cervid species in select regions of North America. The spatial distribution of the disease at the landscape level is associated with movement and space use patterns of white-tailed deer. Using least cost path analyses and spatial land cover data, we evaluated the composition and connectivity of white-tailed deer habitat between locations where CWD positive deer have been harvested in Michigan. We constructed a resistance surface of the affected region based on land cover type, forest density, and road density as these factors are known to influence space use patterns of deer. We then examined the relative connectivity between points of CWD occurrence by performing least cost path analyses between all possible point combinations, and ranking each associated cost to a respective distribution produced by sampling the landscape surrounding each point of origin. Results of this analysis showed that eastbound paths tended to rank significantly lower than westbound paths, and the relative rank of paths was unrelated to total path distance. These findings suggest that deer within the study area are more likely to move in an eastward direction across the landscape. As the spread of CWD is strongly associated with deer movement patterns, this result also suggests that a disease source is likely to be present West of the study area, and that the disease is likely to have spread eastward from this source. This predicted direction of spread is opposite that in which the disease has been detected on the landscape over time. Therefore, to effectively manage the disease, a significant increase in disease monitoring resources should be focused on the Western edge of the study area. Further sampling within this area may prove critical in gaining insight to the true state of the disease in Michigan.